My eyes open. I look around wearily, seeing Jenny next to me, and Emma in the back, both passed out. Todd and Matt are outside, talking in hushed whispers, doing their best to keep from drifting off. The dark sky on the reservation would typically be full of stars on a clear night like this, but through the smoke not even the moon was visible. The fire all around is more than bright enough to make up for it though. My eyes close again....

My eyes open. I look around wearily, seeing Jenny next to me, and Emma in the back, both passed out. Todd and Matt are outside, talking in hushed whispers, doing their best to keep from drifting off. The dark sky on the reservation would typically be full of stars on a clear night like this, but through the smoke not even the moon was visible. The fire all around is more than bright enough to make up for it though. My eyes close again.

Was it five minutes, or fifty since the last time I was awake? My biological clock is off, I have no idea. Sleepily I rub my eyes and look around for my fearless leader Jenny. She is outside the engine talking to So Happy, the native who is ICing the fire. Jenny seems to be upset by something as she argued with him, no doubt over the fact that it is five in the morning and none of us have eaten since lunch the day before. So Happy isn’t exactly living up to his name when he found us taking a bit of a cat nap, but what can really be expected when you work a 24 hour shift without any food?

Jenny comes back to the engine; I start to nod off again as she drives away.
I snap awake as soon as we leave the parking lot, not exactly the nap I was looking for. All I see around me is charred earth, some small flames still smoldering around deep in the black. As we drive by houses there are huge red patches of retardant, where planes had tried to slow the fire’s progress towards the homes. In some cases it proved effective, others hadn’t. 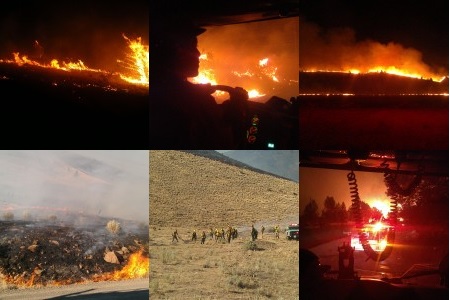 It seems like we are driving with no sense of direction, just looking for places people need water. I feel disoriented, unsure if I am really this lost, or if it is just a lack of sleep. Morning is coming soon, the sun barely breaking through the thick smoke when we pulled in by a small house. Jenny explains that we’re to mop up the area around the river, and near the house. I don’t understand why we are doing mop up when the fire is anything but contained. Regardless Emma and I grab the hoses and start giving water to the Mount Hood hand crew toiling away nearby.

Spray, mix dirt and hot ash, repeat. This continued for an indefinite amount of time. Hunger is eating away, and I’m sure everyone else is feeling the same way. My brain isn’t functioning, I am nearly drunk from lack of sleep, but I keep moving. The sun moves further up in the sky, the temperature is rising; this is when the fire behavior starts to get worse. Suddenly I see lights flashing towards us, and some people moving about. I turn around to see a huge black plume near the house. Immediately I look for Jenny, knowing we need to move the engine.

Sure enough she is already at the engine, hoses being coiled up. I grab a Pulaski and rush over to the action. As I move around the house I see nearly five cords of wood with flames bigger than me. Jenny is quick with the engine, and I grab a hose reel. Emma is already trying to fight off the flames from burning the nearby car, but nothing seems to tame the flames. Some of Mount Hood comes over to try to help, but they aren’t able to get close enough to the flames to separate the wood.

I start spraying at the base of the wood, after all, that’s where you need to start. It’s not working, more and more black smoke plumes upwards, the wood needs to be broken apart. I grab my Pulaski and head closer to the flames. My eyes swell shut, my nose starts running, this is anything but glorious. The heat is intense, but I manage to get a couple of good hits to the split wood and break them apart. Emma covers the wood with foam, and at long last the first sign of the victory over the flames appears. I take a step back, breathe in barely fresh air, and go at it again. Hit, step back breathe, repeat. I continue this process as small amounts of the wood are finally put out. Mount Hood follows my lead, and the fire starts to die.

Within five minutes, the fire is manageable as more engines arrive. No time to enjoy the victory though, our engine needs to refill again. As I hop back in the cab, Emma and Jenny look exhausted. It was only ten in the morning, and I know a long day is ahead of us. Despite this knowledge I’m reinvigorated with adrenaline from the action, and even more so by the mediocre lunch that is waiting for us when we arrive to the water tender. The sandwich and apple provided isn’t a lot, yet it suffices. I’m not expecting to work for another eight hours, but hour by hour I make it through. My comatose sleep by the end of the day and a half shift ends up being enough to get me through the next eleven days, the thought rain and fresh air always on my mind.